Ikhsanov Yersain Valitkhanovich- Rector of Atyrau Engineering-Humanitarian Institute, Doctor of Physical and Mathematical Sciences, Professor, Corresponding Member of the National Academy of Sciences of the Republic of Kazakhstan.

The institute, headed by him for 20 years, is rightfully considered a modern university in the western region of the country, which has achieved significant results in its development and in the training of highly qualified, competitive specialists in demand on the labor market.

He pays special attention to the introduction of new technologies in teaching mathematics, physics and other natural science disciplines, to the promotion and activation of mathematical education among students, to hold regional mathematical Olympiads, as well as informatization of education.

Much attention is paid to strengthening the material base of the institute. Today the institute has 3 new buildings and a dormitory. Educational laboratories equipped with modern innovative and multimedia installations are being acquired.

In 2019, the institute has successfully passed institutional and specialized accreditation for 5 years.

The Institute carries out purposeful work to promote and employ graduates on the basis of establishing constant communication with potential employers by concluding long-term cooperation agreements and introducing dual training.

The results of the rating of educational programs of universities of the Republic of Kazakhstan in 2019, which was carried out by the NСE RK “Atameken” together with the Ministry of Education and Science of the Republic of Kazakhstan, indicate the leading positions of the institute in the specialties “Economics” (4th place), “Construction” (4th place), “Oil and Gas Business” (10 place), “Radio engineering, electronics and telecommunications” (14th place), “Standardization, certification and metrology” (16th place), “Automation and control” (20th place).

According to the results of the Ranking of universities of the Republic of Kazakhstan, held in 2020. The institute took 19th place by the authoritative Agency of the IAAR in the country. These indicators testify to the high level of activity of the institute.

According to the “Rukhani Zhangyru” program, AIGI has developed a single integrated system of professional and social competencies of graduates. Activists of the Committee for Youth Affairs hold events of various scales: the anti-corruption club “Sanaly Urpak”, the volunteer center “RAY of HOPE”, the debate club “Gladiator”, the student group “Zhasyl El”, etc.

Ikhsanov E.V. is a renowned scientist in the field of the theory of differential equations, celestial mechanics and space dynamics.

His formation as a scientist took place in the scientific schools of the Lomonosov Moscow State University, the Moscow Aviation Institute named after Ordzhonikidze and the Institute of Theoretical Astronomy of the USSR Academy of Sciences, where he worked on his Ph.D. thesis “Periodic motions of a symmetric satellite in the vicinity of a conical precession” from 1984-1990, under the guidance of the USSR State Prize laureate, Professor E.A. Grebenikov, and the famous scientist, Professor A.G. Sokolsky.

During this period, he carried out fundamental research on the numerical construction of periodic motions of a satellite in the vicinity of regular precessions.

In the future, the scientific interests of E. V. Ikhsanov become more versatile. Together with Moscow scientists A. G. Sokolsky, V. V. Kuznetsov, A.V. Prikhodko, and others. he participated in the work on the scientific project “SIGMA” with the support of the grant of the Russian Foundation for Basic Research (RFBR) No. 02-03-32883(N. ruk, prof. A. G. Sokolsky) on the topic “Nonlinear dynamic models in plasma chemistry problems”, the purpose of which was theoretical and experimental studies of the effects of low-temperature plasma on aqueous solutions in a plasma chemical reactor using a specific technology. The method of normal forms and the predictor-corrector method, previously used in analytical dynamics, were successfully used by him to solve problems of plasma chemistry.

A special place in the scientific activity of E. V. Ikhsanov is occupied by the study of the problem of the existence of stationary solutions and their stability of Hamiltonian systems of differential equations describing the dynamics of the motion of celestial bodies in models of theoretical cosmic dynamics.

In the new concept of celestial mechanics of the bounded many-body problem (n> 3), formulated by E.A. Grebenikov by analogy with the three-body problem, E. Ikhsanov has carried out fundamental research over the past twenty years and obtained major results that are of great theoretical and practical importance for cosmodynamic models of ten and nine bodies, possessing complete and incomplete symmetry with respect to gravitating masses.

E.V. Ikhsanov was the first in Kazakhstan and very effectively to apply in his research the Theory of conditionally periodic solutions of A.N. Kolmogorov, V.I. Arnold, Y. Moser (KAM-theory) of Hamiltonian systems of torus, which is currently the only tool for studying the Lyapunov stability of four-dimensional Hamiltonian systems with an analytic and periodic Hamiltonian. His doctoral dissertation “The problem of Lyapunov stability in new models of celestial mechanics” is also devoted to this problem. He formulated and proved Lyapunov stability theorems “in resonance cases”, which were not considered earlier for the restricted many-body problem.

The main content of the research carried out and the results obtained:

systems of differential equations for the dynamics of passively gravitating masses in inertial and rotating Euclidean coordinate systems, as well as in phase Hamiltonian spaces, used in their quantitative and qualitative studies, are derived for the named dynamic models;

Graphic and iterative methods for determining the exact coordinates of equilibrium positions in phase non-inertial six-dimensional spaces, depending on the main dynamic and geometric parameters of the models, were developed on the basis of the System of Symbolic Computing “Mathematica”;

by computer algebra methods, resonance relations between the frequencies of linearized systems of differential equations in the vicinity of each stationary point are determined;

theorems on stability and instability in the sense of Lyapunov are proved for frequency resonances of the 3rd and 4th orders;

using methods of numerical integration, the domains of attraction of stable stationary points are investigated and their sizes in the local coordinate system are calculated.

As is known, to study the stability of dynamical systems that are described by Hamiltonian equations, the use of the classical methods of Poincaré, Lyapunov, and others is practically unimportant. Therefore, in the process of constructing the normal form of the Hamiltonian and studying the stability, the author used the currently effective KAM-theory method, which can be classified as a significant achievement in the study of problems in celestial mechanics.

It is also important to emphasize that the use of KAM theory and other local procedures in these studies is fully carried out using computer algebra methods.

Thanks to the use of the above-mentioned modern methods, the tasks set are investigated most fully and the results obtained allow us to comprehensively characterize the qualitative patterns of the considered models.

The volume of the completed research and its quality and significance correspond to the high level of scientific creativity.

In the research conducted over several years (more than 20 years), more than 25 statements (theorems) have been formulated and proved, which together can be regarded as obtaining a significant result in the considered complex problem of the study of dynamical systems of celestial mechanics.

The author’s participation in solid international scientific conferences with reports and publications in reputable publications in the country and abroad, confirm the high level of research.

The most difficult problem of stability of stationary solutions is the “problem of frequency resonances”, when the eigenvalues of the matrix of a linearized system are rationally commensurate. To overcome such cases, the models of celestial mechanics under consideration use a peculiar method of normalizing the Hamiltonians in the vicinity of equilibrium positions, developed by the scientist himself by analogy with the procedures proposed by J. R. R. Tolkien.Birkhoff and A. P. Markeev using the System of Symbolic Calculations “Mathematica”. Using this method, he was able to prove a number of important theorems on the Lyapunov stability of equilibrium positions in the presence of resonances of the 3rd and 4th orders. According to the opinions of authoritative scientists (Yu.A. Ryabov, A. P. Markeev, E. A. Grebenikov), these results are extremely important, because due to the excessive complexity and lack of a universal method, many researchers avoid considering resonant cases.

A fundamental qualitative result was obtained by the scientist for theoretical astrodynamics in the barycentric model of the bounded problem of nine bodies with incomplete symmetry, namely, it is proved that the properties of Lyapunov stability for this model are preserved with the appropriate choice of dynamic parameters, despite the fact that there is no central body in this configuration. For a similar dynamic model with full symmetry, there is always instability of the equilibrium positions. This fundamental qualitative result obtained can undoubtedly be called an outstanding result, since it can be used to study the stability of flat star clusters with complex topology.

The practical value of the performed scientific research is quite high and lies in their possible application in the analysis of the dynamic evolution of flat and globular star clusters over large cosmogonomic time intervals. Since there is a small mass distribution of the components in these cosmic structures, the proposed dynamic models can, in principle, be used as a first approximation to study the stability of these configurations. This is definitely supported by the very existence of such star clusters, possibly with a massive black hole that determines the movement of stars in a limited part of outer space.

The results of many years of creative activity of the scientist are reflected in 82 scientific works, including 3 monographs.

-repeatedly at the joint seminar of the Departments of Mathematical Methods of Nonlinear Analysis and Reliability Theory of the Dorodnitsyn Computing Center of the Russian Academy of Sciences;

In the period 2002-2004, together with Moscow scientists A. G. Sokolsky, V. V. Kuznetsov, A.V. Prikhodko, and others, he participated in the scientific project “SIGMA” with the support of the grant of the Russian Foundation for Basic Research (RFBR) No. 02-03-32883 (N. ruk, prof.A. G. Sokolsky) on the topic “Nonlinear dynamic models in plasma chemistry problems”, the purpose of which was theoretical and experimental studies of the effects of low-temperature plasma on aqueous solutions in a plasma chemical reactor using a specific technology. The method of normal forms and the predictor-corrector method, previously used in analytical dynamics, were successfully used by him to solve problems of plasma chemistry.

2010-2013 Professor Ikhsanov E. V. participated in the implementation of the international scientific project “Analytical and qualitative studies of the Newtonian problem of many bodies” together with the Department of Methods of Nonlinear Analysis and Safety of the A. A. Dorodnitsyn High School of the Russian Academy of Sciences (Doctor of Ph. D., Professor E. A. Grebenikov).

Letters of Gratitude of the President of the Republic of Kazakhstan N. A. Nazarbayev, 2011, 2015.

In 2010. By the decree of the President of the Republic of Kazakhstan, he was awarded the honorary title “Honored Worker of Kazakhstan”. 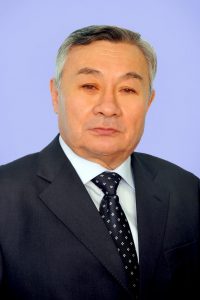